Another Ponzi scheme - "Oil of Asia"

There's another Ponzi scheme going around town. This one calls itself "Oil of Asia" and they describe themselves as:


"one of the leading investment companies globally with financial activity conducted in oil market, Oil of Asia Ltd is a truly recognized for its excellence in customer service and tons of satisfied customers in more."

Do you get the impression that English isn't their first language?
They describe their business like this:


"We collect investments from numerous customers from around the world, unite them in one investment fund while leaving some funds for reserve fund, and then purchase futures and securities sold by oil companies worldwide."

That's the closest you get to an explanation of how they say they make money.
The usual clues are there. They make some remarkable claims about the money you can earn.

There is, I'm afraid, no legitimate investment scheme that can make 3% interest on a consistent basis. Never has been, never will be. If it WAS possible, after 75 days you would have earned a 791% return. That's after just a couple of months. If you kept your money in for a year you'd earn 4,706,960%.

Given that a real bank is only going to give you at most 10% after a year the conclusion is obvious.

There are other clues.

They claim to be registered as a company in the UK. That's true, the company was registered in October 2012 to an address in South East London, 45 Queenswood Road, London SE23. This is what the registered address of this international company looks like. 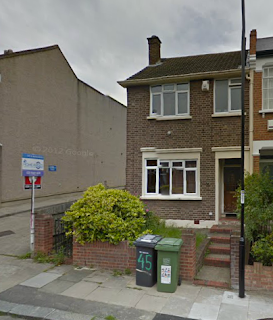 However, despite describing themselves as an "international oil trading and investment corporation" they are NOT registered with the UK's Financial Services Authority.

Please don't waste your time and money on yet another Ponzi scheme.

Update: The list of local contacts in Botswana has increased to eight, TWO of which were contacts for Eurextrade.

Posted by Richard Harriman at 08:47