I really, REALLY like it when people take the time to email me. Even if they’re critical of something I’ve written it’s welcome. Of course I know in these circumstances that I’m right and they’re not but they have a fundamental human right to be wrong.

Some feedback however is just stupid. Most of the silly feedback comes from our blog site on the web, presumably because these articles come up when someone in the world Googles a specific word or phrase.

For instance someone calling himself "Thomas R. Reich" (although someone claiming to be the "real Thomas R Reich" got in touch claiming to know nothing about this) commented on one of my posts about a fake online “university” called Belford University (which Thomas can't spell correctly), saying:


"Stop this slanderous attack on Billford, obviously you are a person of low esteem, who did not qualify for a Life Experience Degree, and are disgruntled!"

Actually my self-esteem was quite high and I consider myself perfectly gruntled. Particularly when people supporting fake universities can’t spell correctly.

That does seem to be a pattern. Just a few days ago I received a comment regarding another fake, non-accredited university calling itself “Northern Port University”. Their alumnus, who decided to remain anonymous, said:


“its real university , i pay 7000 euro and please avoid such silly comments about ir”

Someone else who lacked the courage to give a name, also calling him or herself "Anonymous" responded to my comments about Herbalife products, saying:


"Have you actually tried the product yourself? It bugs me when people have never tried something and they are quick to judge. If you have, and it didn't work for your then I can understand. I have heard and seen it work for alot of people."

My post in this case was about the criminal claims by a Herbalife distributor here in Botswana called Ignatious that he could "cure" heart conditions with Herbalife Products. I don't need to try a herbal "cure" for heart problems to know it's nonsense. Particularly when Herbalife themselves are careful to explain that they make no such claim.

Also, don’t you think it’s curious that "Anonymous" says "I have heard and seen it work for alot of people" when I didn't mention a particular product?

Someone called "behg" didn't like my comments on the "Fundación Donaciones Humanitarias" scam and the equally non-existent "Sir Edward Cooper" running it. This is a funding scam that offered, for instance, the South African government a $800 billion grant. Not a loan, a grant of more than the entire country’s wealth last year. It’s clearly nonsense.

He or she said:


"Unfortunately you are very wrong about this individual and group. Blessed is he who believes but cannot see. Its called vision, little man."

My first reaction was to reflect that a person who "believes but cannot see" maybe called "blessed" but is also called blind.

"Alexi" also commented on another post about the FDH, saying:


"What silly and childish little comments you have to add to such important accusations from your side. Clearly this is way above your pay grade/level of comprehension. If only you would look outside your world of blogs, you would be quite amazed at what goes on. It's a pity that people like you who are bored little men can sit and write about issues you have no understanding about. Your immature attitude is beyond me and don't deserve anymore attention from anyone regarding this matter. Maybe you should focus on where the "consumer" can buy fruit at a better price from." 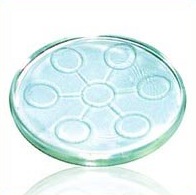 In the past I’ve been critical of a variety of fake miracle cures. In response to my criticism of one of these, a small, circular block of glass called the BioDisc” and the “Questnet” scheme distributing it, yet another person called “Anonymous" said:


"Get your facts right on the bio disc and qnet company and stop jumping into hasty conclusions and deceiving the public. Ignorance is no excuse. The bio disc works whether you believe it or not. also Qnet does not demand ANY registration fee from customers unless a person wants to be an independent representative of the company."


"Richard, you had better research very well about Questnet and its activities rather than jump into hasty conclusions on the bio disc. POINT OF CORRECTION, QNET DOES NOT OPERATE a pyramid scheme, and two, they dont demand any registration fee from customers before buying the product. You only pay registration fee when you want to be part of QNET as an independent representative of the company. PLEASE GET YOUR FACTS RIGHT AND STOP DECEIVING THE PULBIC. AJUBY."

So maybe that gives you a flavor of the feedback we get. Fortunately not one of these ridiculous comments came from within Botswana, which perhaps suggests that we’re not quite as insane, crooked or naïve as some other people surfing the web all day. Luckily almost all the feedback we get form home is constructive, critical (in the best way) or supportive.

You can see all of the comments I made and the responses on our blog site. You can also join in the fun by joining our Facebook group. Please keep sending in the comments!
Posted by Richard Harriman at 17:21

1) One Australia father believed in Mannatech (a company VERY similar to Herbalife) so much, he fed her (who's already sick) nutritional supplement for two weeks, NOT sending her to hospital, believing that product will cure her. She suffered nearly fatal brain injury due to lack of oxygen from heart valve infection, and was only send to hospital when she went into a coma. The girl is now confined to a wheelchair for life

Nutritional supplements CANNOT and DO NOT cure disease and conditions. Any one who claim so is lying, and most likely also breaking company rules.

2) here is an interesting memo from Herbalife to their Ghana members:

"Under the law, no medical, health or therapeutic claims of any kind may be made by Herbalife Independent Distributors. Breaches of this requirement will be treated very seriously and may result in legal action against individual Distributors by the Government authorities in addition to severe sanctions by Herbalife."

I am the real Thomas R. Reich. I did not post that, I have never been to a Belford University. I have a BS and MBA from University of Tampa. Would you please remove that comment, I am the only Thomas R. Reich. I think it was posted as a "Joke" or worse. I respect good universities and would never support that kind of illegitimate institution.

Thank you in advance!