I need you help sir. I received an email last week from Reid Hoffman who claimed to be the CEO for LinkedIn claiming that as the LinkedIn management they saw it worthy to donate $500,000 to my bank account for charitable work. And they stated that I will have to divide the 60% by 40% in which 60% has to be used for charity then 40% I have to use it for the business of my own. But the problem I have now, they sent me all documents and certificates which they claimed to be proof for the donation and they asked me to provide them with my bank details so that they can deposit the donation. But now they are saying for them to transfer the donation into my account I have to pay $235 as a transfer fee.

My question is am I supposed to pay for any donation sent to my account from someone who volunteered to sponsor my project? And lastly my fear is that I gave them my bank details but they are not sending the money in which I suspect they might play some tricks to steal from my account.. Please help me out. 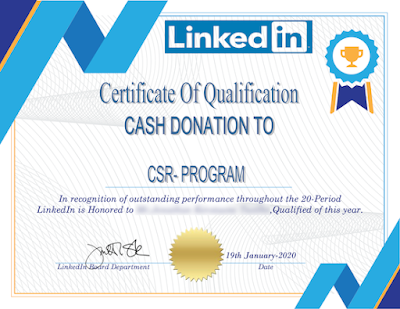 I think you know by now that this is a scam, don’t you?

The simple truth is that total strangers, whether they claim to be the orphaned children of West African billionaires, companies running lotteries in faraway countries or the leaders of famously successful and wealthy companies like Google, Microsoft, Facebook or LinkedIn, don’t approach people offering them enormous amounts of money. They simply don’t.

When these emails arrive, the story always eventually reach the point you’ve reached. In order to get the money they’ve promised to send you, they tell you that you have to send them money first. Sometimes it’s a legal fee, other times they’ll call it an account opening fee or like in your case, a “transfer fee”. This is what the whole thing is about. It’s why these deceptions are called “advance fee” scams, it’s all about the fee they want in advance. Nothing is genuine about this situation. There is no donation and it’s certainly not anyone from LinkedIn you’ve been communicating with.

I know you’re concerned about having given away your bank account details but I don’t think there’s anything wo worry about if you’ve just disclosed the account number and your name. I hope you haven’t disclosed anything more than that? Either way, I think it’s worth contacting your bank and telling them what happened if that makes you any more comfortable. Whatever you do, do NOT send these scammers any money. You will never see it again and scammers don’t offer refunds!

Who must I pay?

Hello Mr Harriman. I had a loan in 2015. I took P25 000 from Get Bucks and I was paying P1,300 every month as instalment. in March 2017 my contract came to an end so I didn't update them after that. So 2017 September I got employed again and went to them. We agreed to pay P900 instalment because I was payed less than before. Even now am still paying. So my worry is I am being called by Norman Bisset everyday telling me about my account with Get Bucks. They are saying my account is sold to them by Get Bucks. I asked them why Get Bucks sell my account to them without notifying me. They tell me that its how its done by the laws. Today I told them that I can't stop salaries office to stop deducting money using Get Bucks because there is no any agreement between me and Norman Bisset. They told me that I will pay for the airtime that they use to call me everytime. So is this how it is in cases like this?

Unfortunately, yes, this is how these things work. If you stop paying your loan instalments without communicating with the company that lent you money, they’ll go through the process described in the loan agreement you originally signed. That agreement probably said that if you stop paying, the lender is entitled to engage debt collectors to recover the money you owe them. The debt collector very often does this by buying the debt from the lender. You then owe the debt collector, not the company you originally borrowed the money from. In your case it probably is Norman Bissett that owns the debt. It’s them you have to pay.

However, you are entitled a full statement of the debt and I think that should be the first thing you should ask for. Then check that they’ve calculated everything correctly. You then need to speak to the original lender to see what they’ve been doing with the P900 instalments you’ve been making. Have they passed them over to the debt collector? If not, what have they done with them?

If you have any difficulty with either company, let me know and I’ll ask them both some questions.
Posted by Richard Harriman at 12:11