Do I really owe that much?

Hi Richard. Pls help me. About 6 years back I bought a laptop from Beares. When I got home I realised it had a crack on the screen that was there and I just thought it was a line inside only when I took it to be updated then was told it was a crack. I took it back and they took it to put new screen. I paid for few months and stopped bcos the laptop took too long to be returned. They told me I should continue paying but then I failed to do it. After several months the laptop came and when I went back to start paying I was told that the money was about P13 000. We argued and they agreed to correct it. I had a financial problem by then I didn't pay well then I negotiated for easy terms but they refused. One day I received a call from sheriffs that my debt now is P30 000 plus. I tried to talk to them but unfortunately Beares is no longer in Molepolole. Pls help me I wonder even if it's interest how can the amount double 4 times. 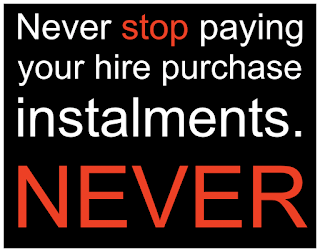 Unfortunately you’re another victim of hire purchase and the effect it has on people.

The first problem is the damage to the laptop. The fact that you didn’t report the damage to the store immediately will cause you a problem. How can you prove that the damage wasn’t caused by you after you took it home? It’s really important to inspect an item like this before you take it home so any damage caused while the store had it can be proved.

Then there was the second problem, a much worse one. You stopped paying your instalments. This is the most important lesson everyone should learn about hire purchase. You must never, regardless of the circumstances, stop paying your instalments. Even if the item you’re buying is damaged, stolen or away for repair, you must keep paying. I know it seems unreasonable and illogical but if you stop paying all of your rights under the hire purchase agreement disappear until you catch up again. The store can repossess the goods and apply penalties and interest to the amount you owe and eventually hand you over to a debt collector to recover the increasing amount you owe them.

I suggest that you contact their Head Office and see if you can negotiate a repayment plan that you can afford. It might also be worth asking for a complete breakdown of the amount you owe them because I’m not sure how a debt can have escalated as much as yours. A debt of over P30,000 for a laptop seems excessive to me. I can also contact them as well to get their feedback.

Can he sell my phone?

I have a problem with one of the phone repairs also selling the electronics. I took my Samsung j1 phone to them in Mahalapye mid January for screen refit. I went to his building to check on him on March but he wasn't around and April too still not around but yesterday I landed the business I found him I took my phone there but these man forced me to leave the phone the time I went to his workshop I asked him not to fix the phone before I come bringing myself with the money because um a student so yesterday I went to him my intention was to come and pick my phone and have it since I don't have the charged amount but the man was angry at me that I should set a deadline of coming to pick my phone cause he long waited for me and if I stay he will sell the phone to somebody else because this not the right way for having somebodies property for some month and he wasn't polite at all so what does these mean. Is there anyhow you can help me ..or send someone to help me or so?

I’m not sure I’m going to give you good news. He’s being unkind but I don’t think the store manager is wrong. You took your phone to him to be repaired and that was what he tried to do. It’s not his fault that you haven’t been able to pay him for the work he has done already. He’s also waited over four months for you to pick up the phone. I don’t imagine that’s cost him a lot of money but it has caused him some inconvenience.

Meanwhile, he IS being unkind by making threats about selling the phone. It still belongs to you and unless he has your agreement to do so he’s not entitled to sell your property. What I suggest is that you get in touch with him and ask him to be patient for a little longer. I’ll also contact him and see if he has a more reasonable side to his character. Let’s be hopeful!
Posted by Richard Harriman at 14:25