Is International Breadwinners legit? People at my church are encouraging me to join but I’m suspicious.

No, it’s not legit, it’s a pyramid scheme and the people doing their best to recruit new members are open about it. Let’s begin by explaining what exactly a pyramid scheme is. Section 9 of the new Consumer Protection Act says that it’s a scheme “where participants in the scheme receive compensation derived primarily from their respective recruitment of other persons as participants”. The key thing is that there is either no product being sold or the product is only a minor part of the business. A pyramid scheme is all about recruiting multiple levels of other people and using their joining money to pay the people above them in the pyramid. 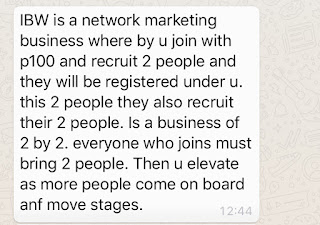 I contacted some of the people recruiting victims into this “International Breadwinners” scheme and they were very open about how it works. I asked whether people sell products or just recruit other people and one of them, apparently a pastor and someone who claims to be a serving police officer was clear. “we dnt sell anything” he told me.

Another, who I believe is his wife, told me that there are “No products. You just get paid by recruiting”. 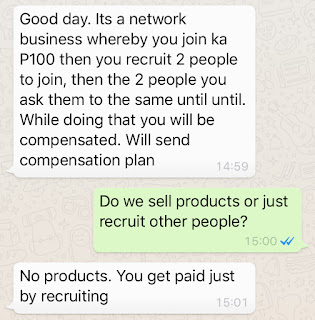 The people I contacted who are recruiting others in this scheme are open about it being a pyramid scheme. I suspect they will soon stop once they realise that the church they operate and their career in law enforcement are at risk. Do you want to face the same penalties they now face?

Is this a real job?

I got an offer through LinkedIn for a job in Russia from an individual by the name of Alesandr Boris Oil & Gas Limited. He told me of the available job vacancy at the organization which were 3 vacancies and asked me of my qualifications. I replied with my qualifications and he responded saying that I should forward my CV and necessary documents to his agent who will take care of the whole process for me to be able to come and be permitted to work in Russia. He gave me the email address of the agent who I managed to reach and he told me what documents he needs in order to process my permit to work in Russia, including transportation & accommodation. However the agent says that his services are not free and demands a fee of 1000 dollars. I told him and Mr Boris that I can’t afford that kind of money therefore Mr Boris says I should try negotiate with the Agent the amount I can afford of which I haven't done.

I was hoping if you can check if Alesandr Boris, his organization and his agents are not a scam. I had approached the police and they referred me to Consumer watchdog which is where I got your email address.

Hope to hear from you soon. Thank you advance.

I don’t need to do much research to say with certainty that this is a scam. The most obvious clue is that they want you pay the “agent” $1,000 to get your work permit. This is simply not how international recruitment works. Genuine companies pay for everything when they recruit someone from overseas. They pay for flights and accommodation and they certainly cover the cost of getting whatever visas might be necessary. They pay them. Not you, not the recruit.

Another clue is quite simple. Why would they offer a job in the oil and gas industry to someone on the other side of the planet who doesn’t have any experience in that industry? And another thing. They didn’t interview you face-to-face? It’s simply not realistic.

This is the beginning of an advance fee scam. The $1,000 (which is curiously flexible when you say you can’t afford it) is what this is all about. If you were to pay them they’ll just continue to invent a list of other payments until you either run out of money or finally realise that you’re being scammed. I suggest that you delete the emails and any others you receive like this.
Posted by Richard Harriman at 15:42