I paid P800 for my ACCA P3 classes last year in March at a tutoring place in the Main Mall. The tutor later told me that there were no P3 classes yet and I was the only student. Therefore I ended up not going at all and my employer took me to BAC instead. The tutor agreed that he will refund me but when I call he'll tell me he forgot or he lost my number or he doesn't have money yet. Kindly help me since it looks like this cycle will not stop. 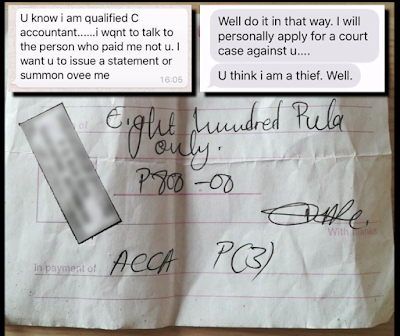 I think this has gone on long enough. The receipt you showed me made it clear that he'd received your money for a class that he didn't deliver and he knew he had to refund you your money. What this supposed accountant seems to forget is that Section 15 (1) (e) of the Consumer Protection Regulations says that when a deal is cancelled, as yours so clearly has been, the service provider must refund any payments made "promptly". I don't think that "promptly" means "a year later". I don't even think it means "three months later". I think that "promptly" means "within a few days, perhaps a week at most".

I contacted the guy and asked him when he was planning to give you your money back but unfortunately he wasn't happy to hear from me. When I mentioned that he might feature in The Voice he SMSed me saying "Well do it in that way. I will personally apply for a court case against u.... U think i am a thief. Well."

I'll be looking forward to the case.

He later told me: "Do what u want am not a thief . I have an office y didnt not summon me or call me to consumer office . I dont run away. I want to talk to her is only peeson i can tell when i refund her . I dont know u".

Later still he told me that he'd lost your number and "I want to talk to her is only peeson i can tell when i refund her . I dont know u". However he then became a bit more reasonable, saying "By the way if u have number of that tell i give after 3 weeks. I went thru several losses by my farm".

Roughly translated into English he means that he'll pay you in three weeks but can we trust him? I think you should write him a letter saying that he has 14 days to refund you or you'll take legal action against him to recover your money. If he fails to do so then you should go straight to the Small Claims Court for an order against him. You might also want to check with the Botswana Institute of Chartered Accountants to see if he's really the Chartered Accountant he claims to be. I suspect he isn't!

Mr Richard. I need your input, is World Ventures legit?

I get asked this question at least once a month and this is the answer I always give.

Like other schemes World Ventures are required by some countries to publish income statements that show what their distributors actually earn from their business. With World Ventures the latest figures from the USA show that three-quarters of all people who join make absolutely nothing from the business. Of the rest, almost all of the money was earned by the few people at the top of the pyramid. You want details? More than two thirds (actually 68.7%) of all the income went to the 3.7% at the top. And let's make it clear, the earnings made by the people at the tops came directly from those at the bottom of the pyramid. That's gross exploitation. 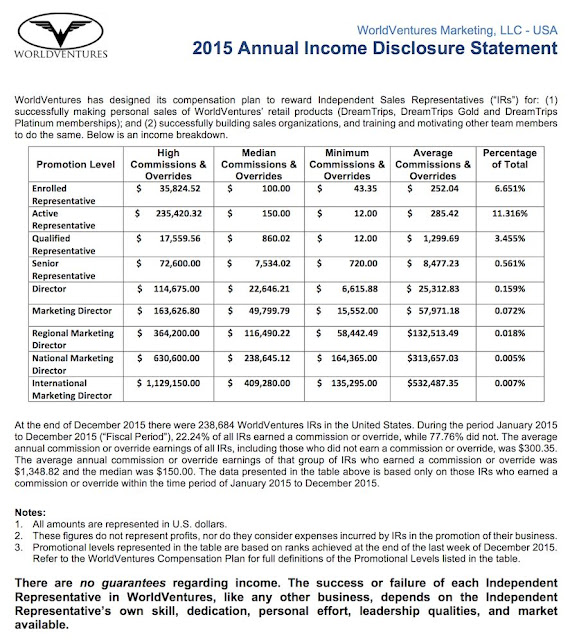 Taking every American recruit into account, the median earnings were a meagre $33, just P330 per year and those figures were income, not profit. They excluded all the costs associated with running the "business" like transport, phone and internet bills. With the exception of those few people at the top, everyone else loses money with World Ventures.

Do you want someone building a pyramid for an exploitative leader? There's a word for that role.
Posted by Richard Harriman at 10:42