I need your advice and help. In March I placed laybye at a store at BBS Mall and the due date was 11th July. I had misplaced my receipt so I went to the store about a week ago to inquire if I can collect my clothes without the receipt and they clearly said No. The lady advised me to go look for the receipt, I asked her what will happen if my laybye expires and she said I could take something from the shop with the money I put down for laybye which was P105.

I found my receipt yesterday and I went to the store to collect clothes. To my dismay the lady told me that I long collected my clothes on the 21 of July but I swear I never collected the clothes. I even showed them the receipt and they refused to refund my money or let me get something amounting to that money. I know its not that much but for me P100 is a lot of money as I’m a single parent caring for my kids alone, so a big shop like pep to cheat its not right. How can I be assisted?

There are several things you can do. Firstly, you can suggest to them that they have breached Section 17 (1) (d) of the Consumer Protection Regulations by “causing a probability of confusion or of misunderstanding as to the legal rights, obligations, or remedies of a party to a transaction”. I think that by telling you that you have no rights to the goods you paid for and without offering any proof that you really collected the goods already, they’ve clearly caused some confusion about your rights, haven’t they?

Another thing you can do is go to a Police Station and ask them to intervene. If the store is claiming that someone has taken the goods you paid for then a crime has been committed, against both the store and you. Ask the police if you can make a formal statement that you did not take the goods and then present that to the store, assuring them that if you are shown to have lied when making the statement, you’ll willingly submit to prosecution for making a false statement.

Finally, we can get in touch with the store to ask them to be a little bit friendlier. Because so far they’ve been the exact opposite of that!

Who should pay for the goats?

Hello sir I need your help I bought some goats from someone and then we agreed with one another to keep the goats at his place until the transfer went through. We didn’t agree with any payment he was saying those goats are for security until the money went through and it takes 14 days for the transfer so now the money went through into his account and he is saying I must pay for the feeds for that 14 days so can you please help with that one. What can I do? 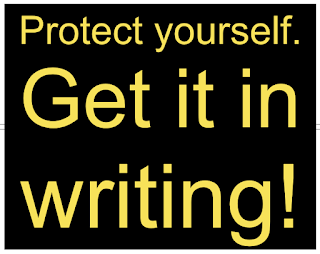 I think this is a very good example of a situation that wouldn’t have occurred if your agreement had been put in writing. If you’d sat down together and written a sale agreement you both would have known who should pay for what and you would have avoided all doubt. I always suggest that whatever it is you’re selling or buying, both sides benefit from having the agreement in writing. That way if there is ever any disagreement you have that agreement to go back to.

Incidentally, what sort of money transfer takes 14 days in 2017? There shouldn’t be any reason for such a long delay.

Given that you don’t have a written agreement to rely on, I suggest you offer a compromise. The other guy did incur costs feeding the goats during the time the money took to transfer but it wasn’t something you had agreed to pay for. Why not suggest to him that you’ll split the costs between you. Maybe he’ll be reasonable?

And next time? Get it in writing!
Posted by Richard Harriman at 23:24