Our own worst enemies

Very often we can be our own worst enemies.

That’s certainly the case with our physical health. We know what we need to do, we know we need to make some simple changes to our diet, our drinking and our general lifestyle but for a range of complicated psychological reasons we just don’t do it. It’s not the cost, the problem is between our ears.

That’s also the case with our financial health. We know something is too good to be true but we’re in denial. We go ahead with something that, if we were being rational, we would avoid like an infectious disease.

I got this message from a member of our Facebook group recently.


“I have an aunt who got scammed by a man from abroad who promised her marriage and gifts. In October the man told her that he has deposited money in a Barclays account. Today she showed me a Barclays offshore account with £30,000, with an account number and a PIN. I accessed it and I tried to transfer the amount to a Botswana account but alas she must have a cost transfer code which is obtained at a bank after paying them. Is this legit sir? Please reply today because she said the man told her to deposit another P4,800 in order to access da money. She is bankrupt but willing to go to micro lenders to get the money to deposit. Please reply so that I can show her that its another scam to swindle her of her cash.”

The message wasn’t clear about whether the aunt had already sent the scammers any money yet so I asked. Yes, I was told, “close to P50,000”. He later told me that “the problem is its like she is hypnotised, she believes everything they tell her and she wants it to be a secret.”

The interesting thing about this scam… Hang on. You do realise this was a scam, don’t you? Because it most certainly IS a scam. Total strangers don’t send £30,000 to people they know only from Facebook and who they’ve never met in person, no matter how good-looking and charming they might be. This is an advance fee scam. There is no boyfriend offering marriage and gifts, there is no bank account and there is no money. It’s all about the “advance fee” the scammers demand. In this case I suspect they’ve demanded it several times. Most scammers ask for P2,000 or P3,000 initially, maybe a little more. I suspect that in this case the auntie must have made several payments and they are still demanding more. All because of that lie about £30,000.

The interesting element is the online banking system that the nephew checked. Clearly scammers are evolving to a higher level of technology. This isn’t just Facebook, this is something a lot more sophisticated. They’ve gone to the trouble of creating a fake version of Barclays’ online banking system to help persuade their victims that the promised money is real. They even included that mechanism where the fake online banking site demands a “cost transfer code” before the money can be delivered. Scammers may be horrible scumbags but they’re not stupid.

The most worrying thing about this whole story is the state of complete denial that the guy’s aunt is in. As he says, she’s been “hypnotised” by this scam. Despite having sent P50,000 to a guy she thinks exists but who she has never met, and despite her nephew and now Consumer Watchdog assuring her that it’s a scam, despite the implausibility of the entire story, she’s now even considering loans from micro-lenders to find more cash to send them. She’s in a completely delusional state and isn’t thinking properly. She’s no longer a rational adult. 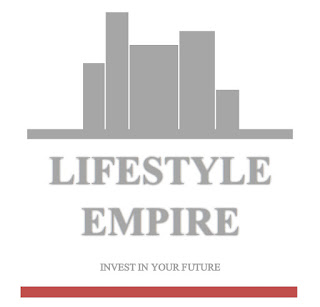 Slightly more rational, but still slightly deluded, are the people that fall victim to the scams and schemes that are still actively recruiting people as you read this. Last year we warned people about a locally-grown scam calling itself Lifestyle Empire. These people said you could earn “30%-35% profit monthly” on an investment of between P1,000 and P100,000. I contacted one of their recruiters and asked if this could possibly be true. Yes, he said, it was true but he couldn’t explain how such enormous returns could be made. He hinted that it was something to do with foreign exchange trading but that was as far as his explanation went. Clearly it was suspicious.

Unfortunately, not everyone saw our warning. We recently heard from several people who fell for the scam and “invested” serious amounts of money. One of them told me that “I subscribed to this opportunity for an amount of P8,520 for a period of 9 months. I was supposed to get my investment returns amount to P36,231 by December but this never saw the light of day to date.”

In total this victim gave the crook a total of P76,680 and he’s just one of several who gave him similar amounts.

The good news, is that there is some hope. The foolish crook signed written agreements with his victims, promising them these returns. Unlike most scam victims they have something they can take to court, some evidence of the scam. Most victims aren’t that lucky.

Some of the victims have already been to the Police about the issue but they say they can’t find the crook-in-chief, the one behind it all. Maybe Consumer Watchdog might have more luck.

The first lesson from these two cases is a simple one. Things that seem too good to be true, like a promised return on your investment of 35% per month, are too good to be true. Finding a genuine romantic partner on Facebook who’ll send you enormous amounts of money isn’t going to happen. Anyone who thinks that either of these things can happen is delusional. You might even argue it’s a mental health issue. It’s simply not rational to think that these things can be true.

The other lesson is that these issues aren’t going away. In fact, they’ve becoming more and more common. You can expect to hear a lot more about them from us in 2017.

Update: The Voice have covered the Lifestyle Empire scam story in today's edition. 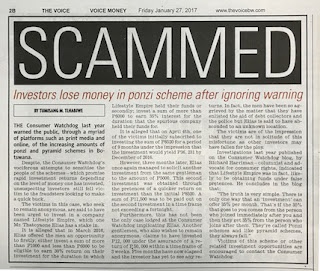 Posted by Richard Harriman at 19:23