Who do you trust?

Over the last few weeks we’ve been running an online survey on honesty, asking members of our Facebook group how they rated the honesty levels of a range of industries. To ensure some democracy we also questioned hundreds of people on the streets of Gaborone as they went about their daily lives. Our online survey and researchers asked people to say whether industries we named were very honest (+2), slightly honest (+1), neither honest or dishonest (0), slightly dishonest (-1) or very dishonest (-2). These results were then compiled, average honesty scores calculated and our honesty league table constructed.

Maybe the surprising news is that none of the industries were thought to be completely honest. The highest score for any industry as a whole was +0.6. It seems that there are no industries that we all trust completely.

Top of the league were new car dealers, who were rated as +0.6, just below slightly honest. This probably isn’t much of a surprise because new car dealers are very aggressively monitored by the car manufacturers they represent. Standards are set and policed and dealers who fail to meet the standards are very quickly sorted out.

Neck and neck in second place right in the middle of “neither honest nor dishonest” range were banks (+0.2) and supermarkets (+0.1). Again this shouldn’t particularly surprise anyone. Banks are quite heavily regulated by the Bank of Botswana and they all know the rules they must play by. However I think it says something about their reputation that they are in the “neither honest nor dishonest” category. I don’t think that banks always help themselves by not being quite as open and transparent as we deserve them to be.

The same goes for supermarkets but I think in their case it’s much more to do with the effect of competition. Most of us in Botswana have the luxury of choice of supermarket so they’re going to do their best to offer us the best deals. However the concerns we all have about food hygiene and pricing probably explain why they aren’t seen as more honest.

Just below zero and also firmly in the “neither” category were electronics and computer stores (-0.1).

Then there was might be a surprise. Attorneys, as an entire profession, scored -0.2, just the wrong side of zero. What is it about attorneys, one of the most aggressively regulated professions that stops them from appearing trustworthy? I think it’s simple. Apart from issues like house sales, executing wills and obscure bits of corporate law, the legal profession is about argument and half the time they’re not going to be on your side of the argument. Some attorneys will even admit this to you, that some of the time they don’t believe what their own client is saying or they don’t believe they have a valid argument but they are being paid to represent them so they’re happy to be “flexible”. It doesn’t actually mean that they’re dishonest but I don’t think that helps their reputation.

In a similar place are newspapers who score -0.3. I’m in a good position to comment about this, having worked with newspapers in Botswana for over a decade. The vast majority of reporters and journalists in Botswana are honorable, patriotic, honest people who just want interesting stories but there are some who are much less trustworthy. Yes, I DO mean you, the reporter to whom I gave a quote for publication a couple of years ago and who instead wrote an entirely fictitious comment from me. Even though an industry is dominated by good people, a few “bad apples” can ruin its reputation for honesty.

Entering the “slightly dishonest” category were cellphone stores (-0.5) and cellphone network providers (-0.6). I don’t think there are any surprises here. We’ve all heard of people buying cellphones that don’t work, who are told that there’s no warranty or who buy phones that turn out to be second hand. We’ve also heard too many stories about consumers’ confusion about airtime, special offers that turn out not to be special and vastly over-priced data bundles that disappear almost immediately. I won’t suggest that this is actually dishonesty but I can understand why people confuse the lack of education and clarity with dishonesty.

Then we get to the one I find most concerning of all. Our survey suggests that insurance companies aren’t trusted (-0.7) and that’s a real worry for me. Insurance can save your home, your business and your livelihood from disaster so it worries me that people will be suggesting to their loved ones that insurance providers can’t be trusted. It’s a real concern. Maybe it’s time for the insurance business to start educating the public a bit more?

And now the lowest three in the perceived honesty league table and there are no surprises.

Third from the bottom are furniture stores (-0.8) who, with their impossible to understand hire purchase schemes, secret contracts and repossession rules probably deserve this reputation.

Second from last are (yet again no surprises) micro-lenders (-1.0). What do I need to say? Rarely has there been an industry with such a large proportion of crooks, cheats and swindlers.

And finally, it’s official. The least trusted industry in Botswana is second-hand car dealers (-1.1). Is anyone surprised? I’m not at all. At least part of this must be due to the activities of the very dubious car importers we all know but also it’s the rather shady local types we all know.

So what do you think? Is this fair? Let us know what you think! 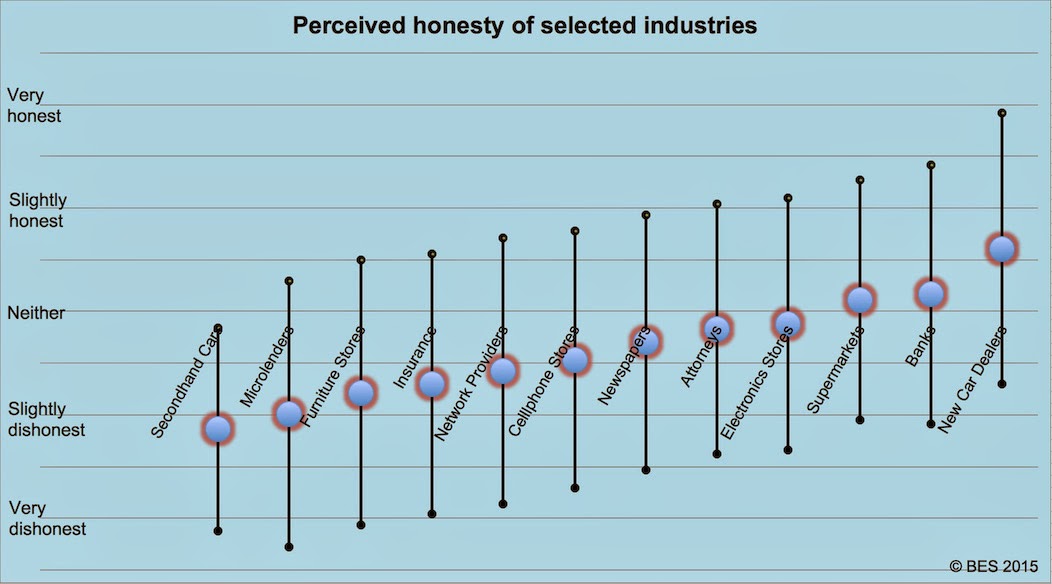 Note: the graph shows the average score for each industry. The vertical bars show the variance from average, one standard deviation above and one below the average. This should give you an impression of how consistent (or not) respondents were in their scores. As you can see there is considerable variation, not everyone's perception are the same.
Posted by Richard Harriman at 19:59