Last week a reader contacted us with a minor disaster. While out of the country someone approached her cellphone provider with a faked letter using her company’s letterhead saying that she had lost her cellphone and needed a replacement SIM card. The letter said that he was her driver and was authorized to pick up the SIM card on her behalf. Because that letter was all they needed they gave the imposter the SIM card he asked for.

He then took that SIM card, plugged it into a cellphone and dialed up her bank’s cellphone banking service. Because she hadn’t ever actually set up this service with her bank the imposter was then taken through the process of setting it up for the first time, including setting up a password that then gave him complete access to her accounts.

Within moments he’d transferred P30,000 from account and started withdrawing the money. (No, I’m not going to tell you how he did this, let’s not give any unscrupulous readers ideas.)

Luckily she came home to Botswana shortly after this happened and immediately noticed that her cellphone no longer worked (because her original SIM card had been disabled when the new SIM card was produced). She immediately informed her network provider who couldn’t understand what had happened. Hadn’t she asked for a replacement SIM card just a few days ago?

They then gave her yet another SIM card, disabling the one the crook had acquired. She was very lucky to have caught him before he took everything. In fact he only got away with about P7,000.

This is what they call SIM-swapping and we all need to know a lot more about this. All it seems to take is a bit of bravery from the crook and a fake letterhead.

So here’s where I’m ignorant.

Why the hell is it so easy to get a SIM card for another person’s number and how come banks make their cellphone banking services so easy for a crook to access? How come a crook with just a copy of your company headed paper can steal your money?

We’re waiting for both the network provider and the bank to educate us and eradicate our ignorance.

I’m also ignorant about irons, specifically the vintage irons that apparently are being bought for more than you and I earn in a year. One advertisement on Facebook recently went like this: 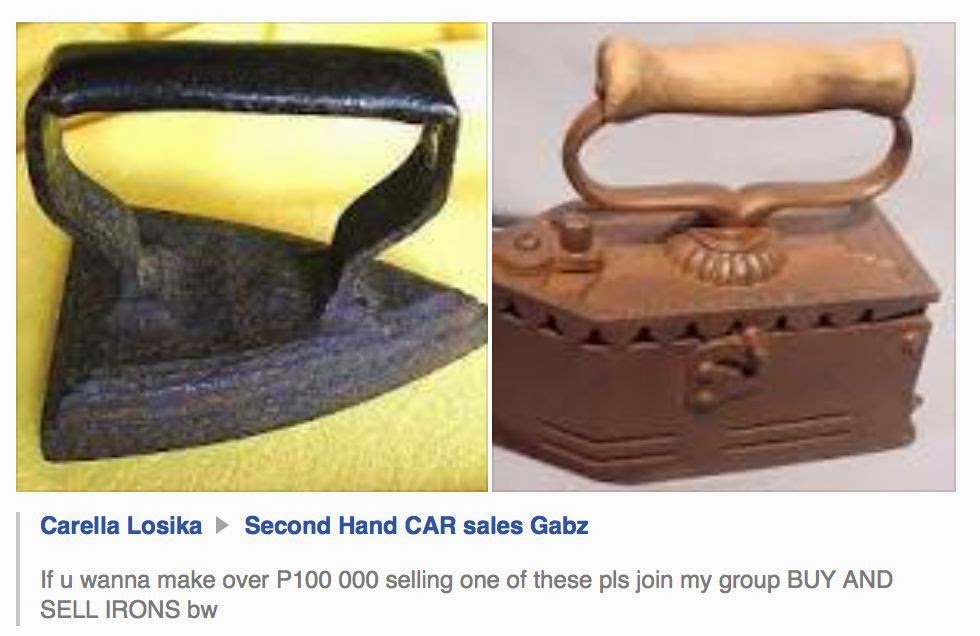 So if you have a vintage iron that (presumably magnetically) attracts a razor blade from 5cm away they’ll buy it from you for P350,000? This is simply unbelievable.

Various suggestions have been made about what’s going on. Some have suggested that the iron itself is valuable but that’s simply not true. The price of scrap iron is tiny compared to these supposed prices. Others have suggested that the irons contain traces of platinum or even uranium but there is precisely no evidence for this and a whole lot of evidence against it.

In short I have absolutely no idea what’s going on here. It’s possible it’s just a ridiculous craze like the legendary tulip mania (or “speculative bubble”) in the Netherlands in the 17th century when prices for tulips soared to astronomical levels. It might just be an old-fashioned scam. I’ve certainly not heard from anyone who has actually sold a vintage iron for these sums. Not one. When we’ve phoned people who claim to be offering these astonishing amounts of money and asked questions they’ve always become remarkably evasive and retracted many of the claims they made. No, they’ve said, they won’t really offer cash, they’ll pay by bank transfer after they’ve taken the iron. But I ask myself how this would benefit them anyway? What can they do with a relatively worthless old iron?

Can you educate me?

I’m also ignorant about the sheer, willful avoidance of responsibility we often hear about. Twice in the last few days we’ve heard from customers who’ve had their basic consumer rights abused and when the stores have been confronted their reaction has been simple. So what?

On one occasion a customer lay-byed two items of clothing but then later changed her mind and only wanted one of them which, by that stage, she had already paid for. The store’s response was simple. We’ve got your money and because you’ve changed your mind you’re not getting anything from us. No clothes and no refund.

Another bought two cheap smartphones only for them both to have sub-standard cameras, be incapable of playing music properly, to overheat regularly and have loose screws holding the devices together. The store’s response was simple. Tough.

I simply don’t get how stores can be so dismissive of consumers’ rights. Maybe they could educate me?
Posted by Richard Harriman at 20:12