It’s been a week of threats to Consumer Watchdog.

Of course none of them are actually even slightly frightening, they’re all rather silly, but it shows we’re onto something.

The first came from a company called First Morgan Capital Group. A couple of readers have contacted us about them, having been approached by this company who offered them a loan. The first is a businessman in Francistown who had applied for a venture capital loan from them. They offered him $323,600 (over P2 million) but he became suspicious when they demanded that he pay them 7% of the loan amount as a security deposit to a bank account in Singapore.

Most of us have applied for a loan at some point in our lives but how many of us were asked to cough up cash in order to get it? Yes, we sign an agreement saying they can seize our goods if we default but has anyone ever been asked to pay money up front before getting a loan? And why would a company that claims to be based in Switzerland and Peru ask for the money to be paid to a bank in Singapore? It’s way too suspicious.


“I am victim of their scam and it has left me in a mess, because I had to borrow money to send to them after I believed that the loan amount would have been wired into my account, only to discover that Kenneth Jones just disappeared. This guy is a thief and people should be aware of him. I though this was a genuine deal because I spoke with him on the phone and he did not sound like the Nigerian type guy. Please be aware of this company. I am still in shock as to what happen to me, I am not able to pay my bills because of this, it has sent me into bankruptcy.”

I got in touch with the company and asked them about this. I asked if they could give me the name of just one company that had received a loan from them. Just one, that’s all I asked for. What they gave me was a single name “Michael Car” who they said owned a bus company in Jamaica and to whom they lent $1.5 million. Unfortunately I couldn’t speak to this person because he doesn’t exist. Neither the name, the phone number they gave or the loan exist.

Then a few weeks ago an American reader (isn’t the internet wonderful?) emailed us and asked about them. He sent First Morgan Capital details of what we’d said and they were not happy at all to be exposed like this. They emailed me and promised that they:


"will provide you with reference to our bankers who have funded at least 30 separate transactions for us."

Unfortunately they changed their minds and won’t give us either details of their supposed bankers or a single, traceable company that has ever received a loan from them.

Now they were also getting angry. The last thing they said in their last email was:


“We have been advised by your lawyers [Yes, they really said that] to get the name and contact for the party who is slandering our firm first then we will proceed. Our lawyer will need this information to file a lawsuit."

Yeah, whatever. I hope they’ll forgive me for not quaking in my boots, wetting myself in fear or crying for my Mummy.

I suspect that this dodgy company might now go quiet and let this exposure (admittedly not the first time they’ve been exposed) die down. However that might be difficult. If you do a Google search for “First Morgan Capital Group” you’ll find that Consumer Watchdog reports are the 4th, 5th and 6th links you find. It’s more likely that they’ll just disappear and reappear under another name .

I was also contacted and threatened by the World Business Guide last week. As reported before and on our blog this deceptive web site invites people to enter their company details into their online directory saying that “Updating is free of charge!” It’s only later that they send you a bill for €995 (about P9,000). Their trick is that “inserting” your entry costs money but “updating it” is free. 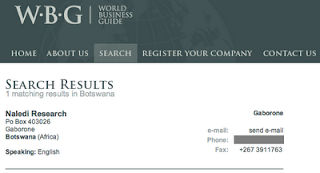 Unfortunately for these scammers they seem to have been scammed themselves. Someone has registered a fake company with them and has given them the Consumer Watchdog fax number and MY cellphone number as contact points for this made-up company. I should thank this well-meaning trickster because I’ve been able to see the faxes the World Business Guide send to people demanding money. The letters they send are fairly official, on headed paper and have a slightly threatening tone. I can imagine how someone might actually fall for this and pay up.

Last week I got a call to my cellphone from a withheld number that turned out to be someone from the Guide trying to find someone representing this company. The woman who called seemed very confused and then very angry when she found out that firstly the company didn’t seem to exist and that I wouldn’t pay them a thing. She got even more upset when I told her who she had reached and suggested she read our blog. I hope they’ve read it now and realise that Botswana is not going to be very fertile ground for them.

Posted by Richard Harriman at 09:06