Consumer Watchdog would like to alert consumers about Nexus Global, an apparent pyramid scheme currently trying to recruit victims in Botswana.

Advertisements have been published that claim that bu joining this scheme recruits cam "learn how to turn P800 into P13000 every Monday". 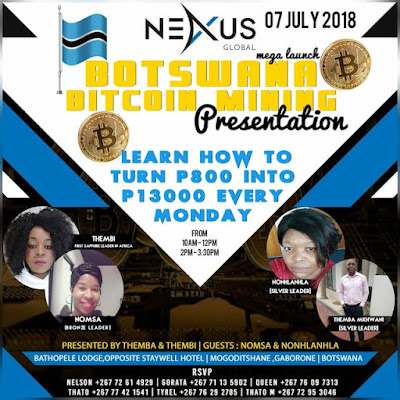 These advertisements suggest that the business is based on "Bitcoin mining" but when asked for more details the recruiters offer a very different explanation of how money can be made in the scheme.

One stated that the money can be made "but you need to recruit people" in order to do so. 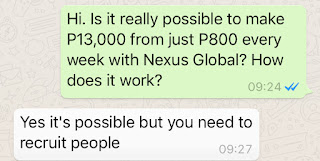 Another confirmed that the best way to make money was simply to recruit other people. 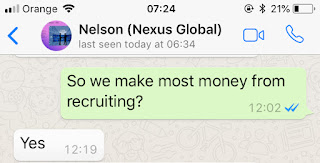 The same person then described the business structure using the following diagram. 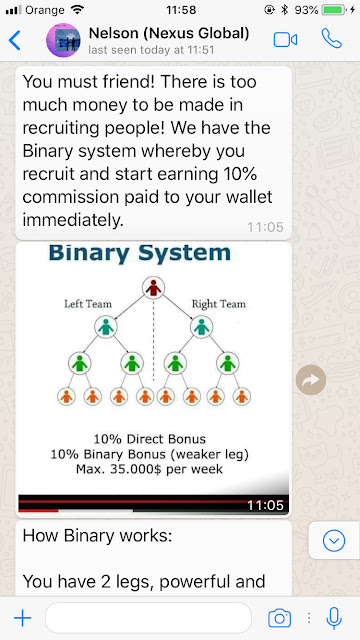 Nexus Global is clearly nothing more than a pyramid scheme as these comments and illustrations demonstrate. There are other clues that should raise consumer's suspicions. The web site for the company was only registered in February of 2018. The founder of the scheme, Christian Michel Scheibener, has a past connection to another very suspicious scheme, Omnia Tech.

It's safe to say that Nexus Global is yet another scam that is doing its best to use references to cryptocurrency technologies to cover a very old-fashioned pyramid scheme.
Posted by Richard Harriman at 15:27