I need your assistance. Last month I paid someone a P500 deposit for them to assist me with proposal for CEDA loans but when I did not receive the receipt after a few days I had a bad feeling and asked if it was too late for me to get my money back and they said there was no problem I could get my money back.

He then said he had to wait for payment from other clients before giving me back my money because I had inconvenienced him which I understood. But its been a month now and I am not sure I will be given my money back and I feel my patience is being taken advantage of. Please your advice and assistance will be highly appreciated.

I think you were extremely reasonable to give the guy a chance to repay you once he received money from other customers, even though I think that tells you a lot about how well he runs his business. If he doesn’t have P500 in the bank you have to wonder how reliable he is in other areas?

Frankly I’m a little tired of this excuse. We’ve heard from all sorts of companies making this excuse. “We can’t refund you until other customers come in with cash.” It’s just not acceptable in 2015. Haven’t they heard of internet banking? Haven’t they realized that delaying a refund is simply wrong?

Real, trustworthy companies, the sort that you want to deal with, set aside modest reserves of cash to cope with these situations. I think it’s also fair to say that companies that say they can help you get a loan but who can’t manage their own finances, can’t be trusted.

I tried to contact the guy but he refuses to respond. I suggest that you write him a formal letter giving him 14 days to give you the refund. If he doesn’t pay you back then you should go straight to the Small Claims Court with all your paperwork and get an order against him.

Update: He sent the reader a message saying “if you feel the need to threaten me go na le small claims court not richard. i dont answer to him and wont talk to him”.

He has one week or the gloves come off. 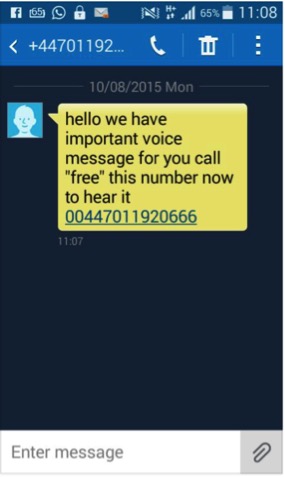 A number of readers have contacted us asking about strange text messages that they’ve received. All of them have originated from overseas and they‘ve all implied that the recipient to should call the number in question.

There are various things that might be happening here. They could be the beginning of a scam, particularly the ones that are trying to entice you with comments on how loveable you are. However what is perhaps more likely, according to a friend who is a telecoms expert, is that this is an example of “International Revenue Share Fraud”, a long-running scam that exploits the high costs of making international calls to certain countries and the money made by some of the operators you’re calling. The scammers do their best to prolong the time you spend on the phone with lengthy recorded messages. The longer you’re on the phone the more money you’re paying them.

The solution is actually very simple. Don’t ever call an international number unless you know exactly who you’re calling. And even then, why aren’t you using Skype or Facetime?
Posted by Richard Harriman at 18:39