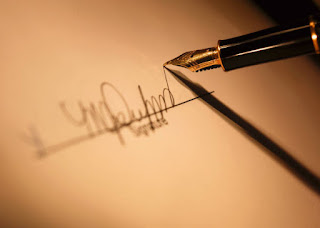 I’ve had a brilliant idea. It’ll solve all our problems.

Ban pens. Ban ink as well. Ban anything that can be used to sign a contract.

I think the time has come to seriously consider whether we are grown up enough to sign contracts.

Frankly I’m becoming a bit impatient with the number of people who come to Consumer Watchdog who find themselves the victims of the contracts they signed. The worst part is that none of these people were forced to sign them. Nobody was holding a gun against their heads, their children hadn’t been kidnapped and nobody had compromising photos of them in embarrassing situations. They had all signed them voluntarily. The only forces that had impelled them to sign were desire, pride or naivete. Oh, a dose of abuse as well.

The first thing that inspired us to start Consumer Watchdog, nearly ten years ago, was store credit. The most outrageous element was, of course, the interest rates that certain stores then charged. Some still do charge shocking interest rates but the most extreme cases appear to have gone away. What’s more in those days the stores didn’t even say what the interest was going to be and nor did they disclose the total amount that had to be repaid on credit. When we told them about the Control of Goods (Marking of Goods) Regulations 1974 which required them to disclose the total amount repayable they quickly changed the way they advertised. Well some of them did. Others took a bit longer to OBEY THE LAW but they do these days.

What also affected us about store credit agreements was the contracts the store’s victims, sorry I mean customers, were signing. One that I saw included a clause that said the customer had received the goods, had inspected them and that they were satisfactory. But this was the contract the customer signed IN THE STORE, before they had even paid for whatever third-rate goods they’d bought, perhaps a week before they had been delivered. They would never be able to reject damaged or incorrect goods. That was abusive.

Another contract, one full of incomprehensibly long words, included a clause saying that the customer confirmed that he or she understood the contract perfectly and vowed never to claim otherwise. Even if it was full of terms like “domicilium citandi et executandi” which virtually nobody understands, the customer could never, in theory, say they hadn’t understood it.

Then there was the worst thing the stores did, something that some of them still do. They won’t let you take the contract away to read it before you sign it. A couple of years we sent some mystery shoppers into all the furniture stores pretending to be customer looking to buy things. Each of them asked if they could see the contract they would be asked to sign. Each of them said they wanted to read it overnight before they made a decision.

One store allowed this. Just one. Others said things like “You can read it when you sign it, then you can keep a copy”. Others said “You get a copy when we deliver the goods”. Others just said “No”.

Why would they do this? Why wouldn’t they allow their customers to read the contract themselves or show it to their partner, parents or friends? You know why.

Some of these problems have gone away. Other have not. There are still stores that try and abuse customers using the contracts they need to sign in order to buy things. That’s one very good reason why we should stop signing them. Let’s, whenever possible, stop signing store credit agreements. Let’s be sensible. Let’s buy second hand things sometimes, let’s look in a certain free advertising magazine for expat leaving sales and get a few bargains instead. Let’s save up and buy for cash instead.

There is another reason why we shouldn’t sign contracts. Some of us don’t seem to know what a contract is.

Let’s start from the beginning. My dictionary defines a contract as “a written or spoken agreement … that is intended to be enforceable by law”. Perhaps the key word is “agreement”. Two responsible parties agree, willingly, freely, without coercion and in the full knowledge of what they’re doing, to exchange some things. The store gives you a fridge, you give them some money. You know what fridge you’ll get and when, they know how much money they’ll get and when. Most store credit agreements are different. Most of them undermine the whole basis of the contract by being deceptive. Sooner or later someone’s going to end up in court and defend themselves by proving they had been lied to.

On other occasions I think people just shouldn’t sign things because they just don’t think they need abide by them. I got an email recently from someone complaining that their landlord wouldn’t let them terminate their lease before it expired after two years. She understood that there was no termination clause in the lease but still wanted a way out. The landlord has offered her the chance to find another tenant but she hadn’t been able to find one who would take over the lease. She asked us “Is the no law that protects the lessee in such a situation?” Yes, there is. It’s called the lease that you signed.

A contract is a contract. You can’t just walk away from them without some sort of cost. It doesn’t matter whether it’s a lease, a store credit agreement of even a marriage. You’re stuck with it.

So just don’t sign it in the first place.
Posted by Richard Harriman at 19:50