It’s been a busy few weeks for us.

Of course a lot of it has revolved around exposing scams. Nothing new there but scammers are evolving, they’re smart people and adapt to exploit public gullibility.

A reader received an email after she posted her details on various job-seeking web sites. Someone calling himself “Michael Lincoln” got in touch, saying he worked for a company called “i-to-i Volunteering”. He offered her a job in Costa Rica, volunteering her services in an orphanage, but paying her a massive $770 per week. She wondered whether this could be true?

What do you think? Are volunteers offering their time in orphanages in Costa Rica, admittedly a fairly wealthy country in Central America, really paid the equivalent of P300,000 per year?

No, of course they’re not.

It didn’t take too much work to realise that this was a scam. The clues were there in the email he sent her. Instead of using their real email domains, "i-to-itravel.com" and "i-to-i.com" his address ended in “worker.com”. There’s the first clue. The phone numbers in his email also weren’t the real ones belonging to the company, in fact the only one that worked was a UK-based cellphone number, one of those redirectable ones that could, in fact, be anywhere in the world. Finally there’s that business about being a volunteer but earning more than a bank manager.

Then there was the clincher. I spoke to the real “i-to-i Volunteering” and they’d heard about this crook already. Several people had been in touch with them to ask whether he was genuine. He wasn’t.

At the same time we were asked about a series of emails people had received, apparently from various banks and credit card companies, all with similar messages. One we were shown opened with this:


“Did you recently verify your User ID or reset the password that you use to manage your American Express Card account online?”

It encouraged anyone who had NOT done so to click on a link in the email. Think about the manipulation in that email. Assuming that you have an American Express (or indeed any other card), how would you react to an email suggesting that someone other than you had recently changed your online password? You’d probably panic. Without thinking too carefully you’d click on the link and be presented with a web page looking just like your real online banking sign-on screen. Almost inevitably you’d enter your username and password, not noticing that the web site you were actually visiting was not the one you expected. Even if you noticed quite quickly it would be too late. Your banking username and password would be held in a database of potential victims by a scammer in some far-flung part of the world. Before you knew it your account would be empty.

The worse news is that if you complained to your bank they would be perfectly entitled to tell you that it wasn’t their fault, it was you that gave away your details. It would be YOUR problem, your loss.

In case you don’t know already the lesson is simple. Real banks never, I mean NEVER, ask you to click on links in emails that they send you. In the unlikely event that a real bank does ever did do that you should close all of your accounts the same day. They can’t be trusted with your money.

It was also more of the same with fake degrees. We’ve had a series of discreet enquiries from people concerned about the degrees their colleagues or even bosses claim to have. Are they genuine degrees and are they genuine universities? Someone recently asked us about a colleague with a doctorate from Rochville “University” a well-known diploma mill. As with all the others I went to their web site and had an online chat with one of their “advisors”. My opening question was “how quickly I can get a degree from Rochville University?” The answer was simple. Without asking me about my experience or my prior qualifications he replied “in 10 to 12 days”. We all know that such a degree is fake, don’t we? Like we know that anyone with such a degree is a fake as well?

However the biggest single subject about which people have asked for advice has been the EurExTrade scam. This is a Ponzi scheme. EurExTrade just take taking some of the “investment” you make to pay the person who joined last week. There’s no actual investment happening, they’re just “robbing Peter to pay Paul”. Sooner or later all Ponzi schemes collapse when they can’t find any new victims to pay the investors higher up the ladder. That’s when there’s a domino effect when everyone tries to withdraw money that no longer actually exists. 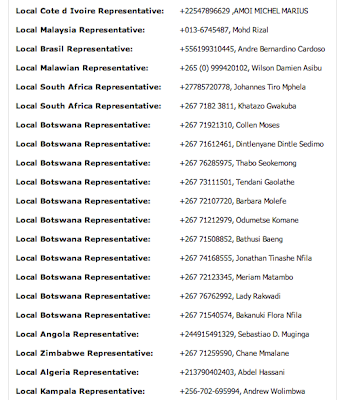 My biggest worry is that this particular scheme is focussed predominantly on Botswana. Almost half of all the contacts given by EurExTrade on their web site have phone numbers starting with +267. Why us? Why are we so special? Or perhaps I should ask why are we so gullible?

I heard from someone recently who told me that all of the senior citizens in her home village had transferred their savings to EurExTrade. Nobody has had the courage yet to tell them that they will never see that money again. They are destined for an old age in poverty as a result. Nobody has yet caught the thief who recruited them and encouraged them to throw their money away. Probably because they know him or her. EurExTrade pay up to 10% commission to people who recruit other victims so the recruiter has an interest in stealing other people’s money.

The lesson of course is the same. All of these scams and deceptions can easily be beaten by a small dose of skepticism. However there’s clearly not nearly enough of it.
Posted by Richard Harriman at 16:37