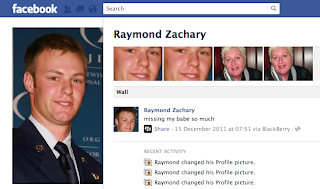 We received an email from a woman who had posted her profile on a dating site and had 4 responses from what seemed like eligible men. All four of them turned out to be "romantic scammers". It's the usual story, they seduce the woman electronically with kind words, attention and pictures of hunky guys. Sooner or later they ask for money.

One has a Facebook profile which Facebook users can see here. He calls himself "Raymond Zachary" and shows pictures of himself in uniform and receiving a medal. In fact the medal picture is interesting. Here's the selection of pictures he proudly posts: 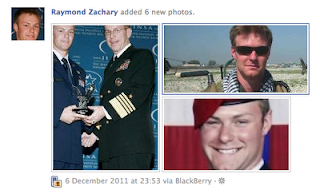 What a strange coincidence. Here's a picture from a story about a genuine US soldier, Staff Sgt. Zachary Rhyner, receiving an award. This is after he received "the Air Force Cross, the service’s highest distinction for valor except for the Medal of Honor. He becomes just the third airmen — the other two died in battle — to receive the honor since 2001 and only the 25th enlisted airman since enlisted airmen became eligible in 1960". 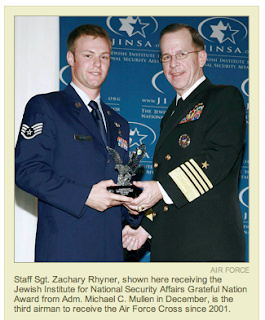 Forget the geopolitical situation right now, forget the reasons behind invasions, forget everything except that this is a very brave young man doing what he thought was good and remember that some horrible scammer has stolen his image to exploit women and steal their money.

In case you have a quiet moment with nothing better to do, you can email the scammer by clicking here. Make sure you say something VERY rude.
Posted by Richard Harriman at 22:15