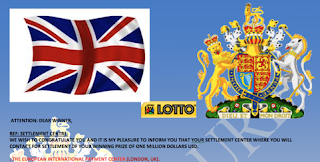 Last week I received this suspicious mail and I have some reasons to think that it is a scam because in the first place they say their offices are in London but they say their price is in US Dollars. The information just doesn't add up because I never entered any lotto competition and they can't tell which of my mails has won.

Is this a scam?

I am kindly asking to be assisted to confirm if at all this girl isn’t a scammer. I got to get her contacts in zoosk.com website for singles who wish to meet other singles from different parts of the world and so one morning she flirted me and she told me that she is in a refugee camp in Senegal and in actual fact she is originating from Liberia but due to that her father Dr Kuru was a politician all the parents were killed and she fled to Senegal.

So she says she is the sole beneficiary of the father who has left about $6 million for her at a bank in London. She wants me to send her $320 to help her transfer the money in to my account.

So I’m not sure of her story more so that I haven’t even met her. Can you help me check if she is telling the truth? Her name is Rita Kuru.

There is absolutely no doubt that this is a scam. There is no such person as “Rita Kuru” and everything “she” has told you is a lie. I bet you haven’t even spoken to her on the phone yet to confirm that she’s really a woman?

The story about the dead politician father, the refugee camp and the bank account full of money are a very common story told by scammers, just like the “advance fee” of $320 is the usual demand. You can bet that after you’ve paid them this money, which I bet they want you to pay using Western Union, you will never hear from them again. Unless however they think you are particularly gullible and naïve. We’ve heard of scammers who go back to the same victims over and over again demanding, and sometimes receiving, more and more money, all with the distant and impossible promise of those non-existent millions.

The best thing you can do is to delete the emails you’ve received and never to reply to anything like this again.

Kindly assist. I have a credit card from one of the banks which I have been using for some time now and repaying the interest regularly, although sometimes skipped a month or late repayment.

I spoke to them on the phone and asked them to make some arrangement for me to repay the outstanding balance in 3 monthly instalments and stop the facility from accruing more interest as they can also see that I am struggling to pay the whole amount to zero the balance and eventually stop the facility. Unfortunately I did not take the name of the woman I was talking to but she told me that it’s not possible, the only thing I should do is to continue paying the minimum charge every month or to pay the whole amount to clear up.

This facility has been on for some time now and I feel it’s doing me more harm than good. I would really prefer to pay at least P1,000 every month without any further interest on the outstanding balance so that I can finish the debt and cancel the facility.

Kindly investigate and advice accordingly. Your assistance will be highly appreciated.

The advice you were given, that the two options are either to pay the minimum balance each month or to pay off everything aren’t quite correct. There is a third option. You can pay any amount between the minimum balance and the total outstanding balance each month until you’ve paid off your debt. It’s really up to you to work out how much you can afford to pay each month. Needless to say the sooner you pay off the debt the better but don’t do anything silly to achieve this. Leave yourself enough money to pay for the essentials like food and rent.

As for getting the bank not to apply interest to your outstanding balance I suspect your chances are slim. Why would the bank want to do this? This is exactly how banks make money, by lending money to you (yes, a credit card IS a way of lending you money) and then charging you interest. Asking a bank not to charge interest is like asking a scammer to tell the truth, a store credit scheme to be open about their terms and conditions or a combi driver to obey a red light. It’s not going to happen.

I suggest you sit down and work out how much you can afford each month and then just get busy making those payments.
Posted by Richard Harriman at 16:56