I was a student in South Africa between 2001 and 2005 and during that time I opened an account at Edgars in Pretoria. I came back to Botswana unexpectedly and as a result my account suffered in the process as I wasn’t working. The balance was around R1,000 then. Edgars in SA passed the account to their lawyers who started calling time and again. They advised me to pay at least P100 but when I went to Edgars in Gaborone (coming from Mahalapye) they declined my payment saying they don’t do foreign accounts. When I got back to the lawyers they didn’t believe me and dismissed it as tactics to avoid paying. The games continued until this year (2010) when upon my insistence they sent me a R4,300 statement and details of an FNB account where I was meant to deposit money. I deposited two P500 instalments in July and August.

Just a few weeks back I contacted Edgars for a statement as the lawyers refused to send me one. To my horror I was told the account details I was sent were incorrect and I should call the firm to trace my money. I was given another account detail of a different company. I do have money to clear the account but I’m afraid to lose my money. How do I trust them? Even the statement that the lawyers had sent me has my address in Kwa Zulu Natal and I’ve never lived there. Please help me sort this mess?

Firstly let me congratulate you for not trying to avoid your obligations. Unlike some people we hear from you are prepared to settle the debt that they claim you owe. However they have clearly made a complete mess of this situation and they were clearly negligent by giving you the wrong account details to pay them the money you owed. You must not be made to pay that money again, that’s up to them to sort out.

Also, the fact that they have a wrong address for you suggests that they’ve mixed you up with someone else. I can understand how that can happen in a busy debt collection company but it’s clearly not your fault and it’s their job to fix it.

We’ll get in touch with Edgars and see if they can’t come up with a solution to this problem. Meanwhile I suggest that you send them a letter, copy it to the lawyers saying that you are fully prepared to pay them everything that you owe them, provided that they credit you with the P1,000 you paid in to the wrong account because of their mistake and once they’ve given you a complete and up-to-date statement of your account.

Last week we reported on a story of a reader who bought three pairs of shoes from a store in the Main Mall in Gaborone only for the pair she was wearing to break less than 20 minutes later, before she even got back to her office. When she went back to the store to complain and demand a refund she was told that she had have known that for P100 three pairs of shoes were going to be defective.

We advised her on her rights and suggested that she educate the owner of the store on the Consumer Protection Regulations and the store’s obligation only to sell things that are of “merchantable quality” and that are “fit for the purpose”.

The result? A complete refund.

This is a great example of a consumer refusing to be abused and standing up for her rights. We all should follow her example and start saying No to stores that disrespect us.

Several readers have been in touch asking us to confirm whether emails they’ve received from total strangers can be believed. 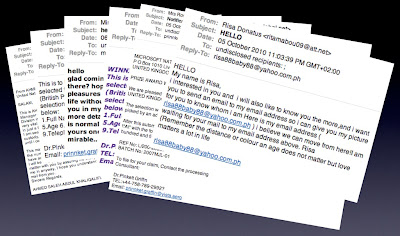 No, the answer is no, they can NOT be believed.

No, the manager of the “United Nation Bonded WareHouse Wales Branch” (who strangely uses a free Portugese email address) does not have a box of money for you. Nor is “Dr.Pinkett Griffin” of the “microsoft promo selection system (ESS) London Uk” (another free email address) going to give you £750,000 once you given him all your ID details. Nor is “Miss Mirable” who emails total strangers inviting them to get in touch offering love and affection real. She’s almost certainly a rather fat, sweaty guy in a scam factory in Lagos.

All the usual signs were there in the emails. Reputable organisations so not send out important emails from free web-based email systems like Yahoo, Gmail and Hotmail. They also employ people who can either spell correctly without help or who know how to use spell-checkers on their computers. Above all, total strangers don’t approach you with unbelievable offers that come without consequences. In all of these cases there would have come a point when the scammers would have demanded their “advance fee”, sometimes a legal fee, sometimes a customs duty, sometimes a bribe all to be paid via Western Union. That’s when they would have disappeared with your cash for ever.

Just delete them, OK?
Posted by Richard Harriman at 09:07