A few weeks ago me and my workmate were approached by a lady claiming to be a representative of TVI (Travel Ventures International) which claims to be selling travel packages to people. Apparently you become a consultant with them and sell travel packages. You join by paying a fee of P2,100, then you get 8 nights free to a 5 star hotel and discount in car rentals and flight tickets. From there you look for 3 people to join under you for which you will then receive $500 in reward and climb the ladder until you get $10,000.

Well I have been thinking of joining for a while. The company has meetings in the evenings on Sundays. Well before I get ripped off I want to know the real truth. Is this is a multilevel company like Amway?

You are very wise to be cautious. Very wise indeed.

We first reported about TVI Express in February this year when another consumer asked us a very similar question. I think it’s worth repeating the advice we gave again as a warning to all readers of The Voice.

TVI describe themselves as a Direct Selling company which is just another way of describing Multi-Level or Network Marketing schemes. Others would just describe them as a pyramid-structured selling scheme.

As with all MLM schemes they have a very glossy looking web site that is full of pictures of happy smiling people, rainbows, private jets, sunshine and empty promises. Their main page includes an invitation to find out “how a few extra hours can build a Multi Million Dollar Business for you and your family”.

Elsewhere on their web site, in the Frequently Asked Questions page, is a very interesting item. It poses the question “Do I need to sell any products?”. The answer is worth quoting in full:


“No. You don’t need to sell any products. TVI Express is a unique e-commerce opportunity allowing you to build the Business around the globe sitting at your home. However, we do support leaders who take initiatives to promote the opportunity offline conducting seminars and workshops about the Opportunity.” 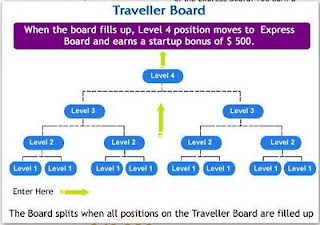 So all you do is join, pay them the joining fee of $250, then recruit two other people and money miraculously appears from nowhere?

TVI is a classic pyramid scheme. What you do is recruit two other people, encourage them each to recruit another two and so on down the pyramid. Every recruit must pay the $250 entry fee and those amounts soon mount up. Once you’ve recruited 3 levels beneath you (15 victims, 6 who have recruited others) you get $250 cash and a $250 holiday voucher. But that’s after TVI have earned a total of $3,750. Your $250 isn’t much of a reward is it?

Your network must grow even more if you want to get to the next reward level. They claim that when you have 7 levels beneath you (255 people, 127 recruiting others beneath them) they’ll give you a massive $10,000. But that’s after TVI has earned a massive $63,750. Again that’s not so impressive is it? But anyway, let’s get real. Do you really think that your team will be able to find 255 people stupid enough to fall for this hogwash?

TVI promise to give you all sorts of vouchers for holidays as you build your network of fools. They promise “incentives ranging from Luxury cars to Private Jets and Splendid Villas in exotic locations around the world” but that’s just another part of the scam. What use is a holiday voucher if you can’t afford to go on holiday?

Like all pyramid schemes TVI WILL fail. Even the “legitimate” MLM schemes like Amway, who at least have products to sell, have been forced to concede that only a tiny minority of people who join make any profit.

TVI is simply unbelievable and should NOT be trusted. It’s a pyramid scheme and I guarantee that if you give them your money you’ll just be throwing it away.
Posted by Richard Harriman at 09:25

Reading updated articles such as this has been a real eye opener for me and for the friends I share them with. We need to get in a habit of assessing these things and using common sense in our approach. Unfortunately "common sense is not so common" as they say. Thanks again! Irfan